Millennials Love This Beauty Brand for How it Makes Them Feel

Millennials Love This Beauty Brand for How it Makes Them Feel

Established beauty companies have rarely been representative or concerned about the common woman. But today, women are rejecting their age-old indoctrination and replacing them with brands with more acceptable ideologies. One such brand is the online-only beauty startup Glossier, whose skin-first, makeup-second, and customer-as-influencer approach has garnered a maniacal following. That its customer service team, called gTEAM, knows how to keep the customers engaged has been of help, too.

“Oh hey there! Manouska here—we’ve probably DM’d on Instagram,” Manouska Jeantus, a gTEAM member writes on the startup’s antecedent blog, ‘Into the Gloss (ITG).’ It’s her personal essay and she is sharing her skin woes. “To me, my skin isn’t just skin,” she adds. “It’s inextricably wrapped in how I feel about myself as a person—and it’s something I picked on, poked at, and obsessed over every single day since I turned 9.”

Although the number of reads/views are hidden, Manouska’s blog quickly amasses a form of virality on ITG. It is soon trailed by long, thoughtful comments – 285 to be precise. And while Manouska sentimentally concludes her essay by celebrating her skin’s miraculous improvement thanks to a Glossier product, most comments celebrate her.

The commenters (assumably loyal readers of ITG) are acknowledging and appreciating her struggle by telling their own story, discussing products that did and didn’t work for them, and chiming in about the wonders of Glossier. Unknowingly, they’re tripling as the focus group for the company’s research, business and customer service departments, all at once. But it’s Manouska’s five-word introduction – ‘we’ve probably DM’d on Instagram’ – neither thought nor spoken in a traditional beauty conglomerate office – that holds the secrets to Glossier’s success. 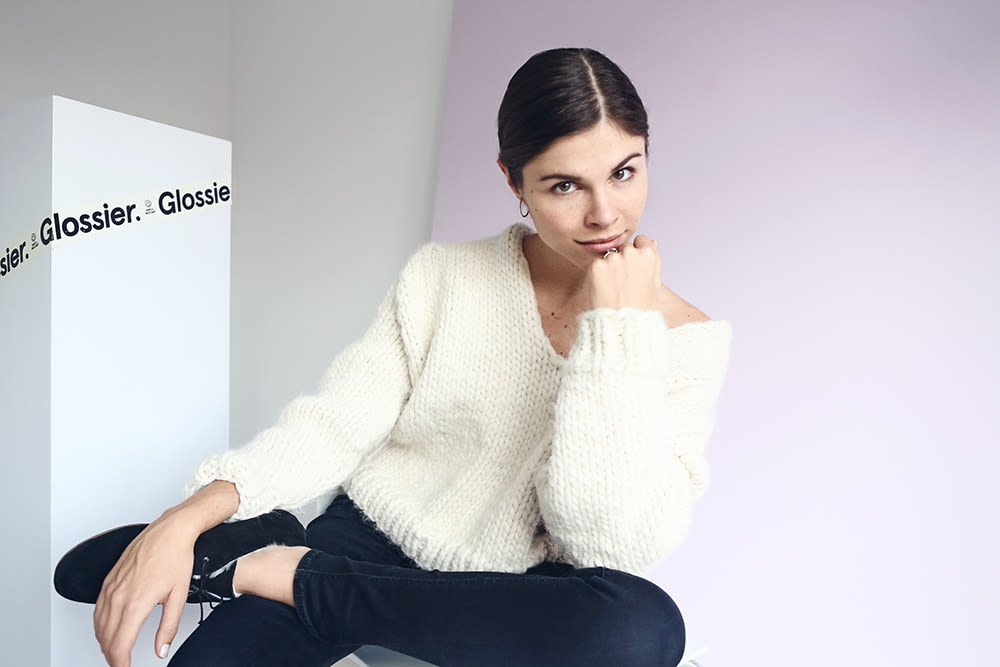 Founder and CEO, Emily Weiss (Photo: Into The Gloss)

In 2010, Emily Weiss the founder and CEO of Glossier, started Into The Gloss, a blog featuring the kind of beauty stories that magazines rebuffed. Its most popular feature, “The Top Shelf,” for which Weiss interviewed models and influential women about their makeup and skincare routines, openly mentioned people, products, brands, and favourites. It became an instant hit and currently has over two million unique views monthly. Weiss, a NYU art graduate with a brief stint at MTV’s The Hills, and a couple of jobs at Condé Nast — first at W magazine and then at Vogue – naturally transitioned ITG into a business.

It was 2014 and Weiss was conscious that she was competing with brands that were older than her grandparents. Brands, that had among themselves, made beauty a $445+ billion industry. If she wanted to convert her ITG readers into customers and make them the influencers who’d then help expand her business, she needed a new kind of blitzkrieg. So even before the website went live, she launched her business on Instagram. “We built the brand in real time, showing the how-it’s-made, behind-the-scenes for a whole month before we even announced the company. By the time we launched, we had something like 15,000 followers, and people didn’t even know yet what it was,” Weiss told Fast Company.

Weiss says that she wanted to rise above the loud legacy (and baggage) bigger brands brought and replace it with the chatter of conversation. For example, when launching a cleanser, Weiss asked readers what would their dream face wash would be. Three hundred and eighty one people responded and then the team set out to create what their readers had just told them they desired.

But starting the company didn’t come easy. Weiss is one of the only 2% female founders who got venture capital funding in 2017. Weiss told CNN Money how as a female founder, her experience of pitching to venture capitalists was like pitching to a lot of dads. Eleven out of 12 refused her, before Kirsten Green, a San Francisco VC concerned about gender imparity in the startup world, said yes. Green’s Forerunner Ventures invested $2 million before the launch of Glossier. Then she raised $8.4 million in additional VC financing from investors just a month after Glossier’s launch in November 2014. Glossier’s Series B funding was $24 million in November 2016 and last month, it raised $52 million in series C funding.

Since its inception, Glossier is regularly called a millennial cult brand. Its success can be attributed as much to its (and its customers) rebellion against uncaring, authoritative brands as to its strategy of making the customers its influencers. Weiss is convinced that girls discover beauty products through their friends and has used this learning to build stronger relationships by, say, inviting 100 of Glossier’s top customers to exchange messages on a Slack channel or through an incentive-laden referral program. Glossier has 1 million Instagram followers and it’s here that the influencers are identified and heard, and where its reputed gTeam unleashes its power. Personalised one-on-one interactions with customers is not one-off but an everyday routine at the company.

But as one of the first successful makeup brands to be born out of social media, it is most compelling to note what the brand is saying.

Glossier’s overall messaging is not brazen like other brands but is underwhelming in a cool, millennial way. It has an undertone of – if you like, here’s our makeup and skincare products, but you’re beautiful anyway. Try its website copy: We’re not out to make you into someone else or complicate your routine. We just want to bring you the best makeup products.

When customers receive a Glossier product, it comes in a pink bubble wrap with stickers, and the inside flap says: “Everyone says they’re low maintenance (it’s ok, neither are we)”. This messaging is intentionally blithe and also rooted in study. For example, an e-commerce packaging analysis found that 39% of online shoppers shared a product image on social media. As its social channels are its greatest benefactors, Glossier’s understanding of where it needs to go is on point.

The beauty startup’s Instagram bio is: “Skin first, Makeup second.” Tellingly, Glossier was launched by selling four items all focussed on skincare: a face mist, concealer, skin salve, and priming moisturizer. Today, its 20+ products are sold directly to customers in the US, Canada, UK with plans to expand to France by the end of this year. It has a brick and mortar shop in New York and just launched a cafe in San Francisco.

However, the beauty industry is closely-scrutinised and even fans have picked flaws in Glossier’s products. Some have complained that Glossier products don’t detail the formula behind them, or that the products don’t cater to dark skin tones, or work on their skin at all. Many have also found it unappetizing that even though Glossier maintains that it doesn’t believe in celebrity endorsements, it used the platform of The Oscars 2018 and various celebrities like Allison Janney to promote its newest product, Lidstar.

Glossier’s Cleanser (Photo: Into The Gloss)

But Glossier’s success shows that its products may not appease everyone but what does is the self-empowering lifestyle the brand exudes. Weiss claims that the company  has been carrying heavy waitlists on its often sold-out products and has grown 600% between 2015-16 by keenly listening to their customers, and delivering on their demands.

The less than four-year-old company will have to keep distinguishing itself to continue posing in the beauty industry, but at the moment, it is flourishing thanks to its pithy messaging, strong customer relationship, and its biggest weapon: Into the Gloss. However with multiple products, locations, and a recent post on suggestions to ‘Develop the Glossier Candle’, it will perhaps be Glossier’s biggest challenge to not turn into a beauty conglomerate it is trying so hard to be so different from.