A CryptoKitty Can Make You Millions… sort of!

A CryptoKitty Can Make You Millions… sort of!

Look at this cat.

*hissing noises*! I’m Founder Cat #18. I enjoy tripping my owner, eating until I loathe myself, and reading garfield. When no one’s home, I invite my pals over and we listen to Rihanna. I look forward to riding unicorns with you.

In which world is that possible?

A world that hasn’t fully comprehended or utilised the blockchain technology.

Founder Cat #18’s home is CryptoKitties, a game where you can buy cats with the hope of selling them at a much higher price later. More accurately, CryptoKitties are digital, collectible cats built on the Ethereum blockchain.

Today, money is transferred from one to another using a trusted, third-party source. This middle-person transfers the money after identifying the right account and charging a fee. Blockchain is a technology that makes the transfer, and subsequently trade, possible in real-time, more efficiently, and without the need for this third-party. It uses a ledger where people know how much each user owns and how much is being transacted. And since it isn’t centrally controlled, chances of destruction are pretty rare. Simply, blockchain decentralises and democratizes transactions and eliminates central authorities.

CryptoKitties is a game built on Ethereum which is considered a public computing platform. Ethereum uses the blockchain technology and cryptocurrency Ether (ETH) for the transactions. Where does bitcoin feature in all of this? It doesn’t. Bitcoin is just one type of cryptocurrency.

Monopoly helped people understand money management and CandyCrush and Farmville helped popularise social media. CryptoKitties can be seen as a tool trying to make blockchain easier to understand. Not by teaching you about it like we just attempted, but by allowing you to play with it.

80% people around the world, according to HSBC’s Rise of the Technophobe survey, have not heard of Blockchain or the digital ledger technology, and even if they have, they cannot explain what it does. 80% might just be a conservative estimate, as existing blockchain users are typically investors or a small group largely interested in bitcoin valuations.

At its core, the founders of this seemingly stupid game believe that blockchain has the ‘potential to disrupt the financial industry’. But given the uncertainty of its adoption, they are also having fun along the way. In order to ensure that the blockchain technology is not ‘stymied’ by focussing on ‘low-hanging fruit’ of high bitcoin valuations, CryptoKitties is gamifying the internet’s love for adorable cats. Each CryptoKitty is unique, indestructible, with specific (c)attributes (chronic eye shape, grim mouth, the type) represented in the form of a non-fungible token. Cats are just a representation for relatability, it really could have been anything.

So how do CryptoKitties meow?

To play this game, you have to own a CryptoKitty cat. First, you need to have ETH, the currency CryptoKitties accept. At the time of writing this piece, 1 ETH was at the price of $411. If you don’t have ETH, you can use an exchange to have your currency converted. You will need a new wallet in the form of a Chrome extension called Metamask. It will become your Ethereum wallet and will process your transactions.

You can then go to the CryptoKitties marketplace and after sorting cats according to price, generation, age, and cuteness (of course), you can buy your own cat. But this is where the game only begins… 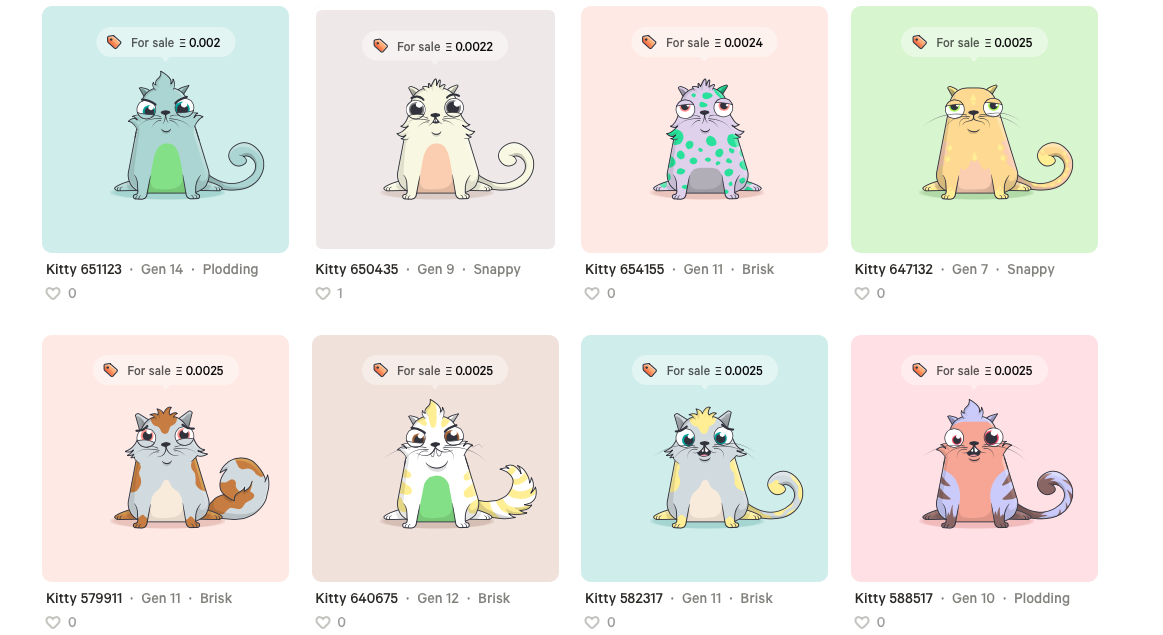 If you want to buy a physical collectible, you’re dependent on a central authority. They may decide to commercialise a collectible you’ve spent a ton of money on or simply not restock or issue it altogether. Digital collectibles, on the other hand, can be subjected to hacking or cheating, and don’t have the value of a physical collectible – in the sense that they cannot be touched or exhibited. CryptoKitties may have forayed into the world of secure collectibles through blockchain but what makes it relevant and functional is its next feature: breeding.

Once you’ve bought a cat, you can breed it to produce a new cat that is a genetic combination of its parents. By allowing the cats to breed, they don’t just remain a digital collectible and CryptoKitties becomes a self-sustaining community where users can birth new collectibles and trade them on the ethereum blockchain.

But to reach this far, you have to pay at every step – from breeding fees to transaction fees. CryptoKitties earns on the sale of each cat and receives ‘3.75% of each transaction conducted on its marketplace’.

The game was developed by Vancouver based blockchain company Axiom Zen. Its engineer Mack Flavelle came up with the idea of putting cats on the blockchain and Dieter Shirley championed the technical innovation.

During the time of launch in November 2017, 50,000 cats were stored in a smart contract (a computer protocol intended to digitally facilitate, verify, or enforce a negotiation) on the Ethereum blockchain. Since then, one cat is being sold every 15 minutes through a smart contract and via an auction process where sellers choose a high opening bid, a minimum closing bid, and a timeframe for which they’d like their auction to run.

Each cat’s distinct visual appearance and genes are also stored in the smart contract. These bits of code of two cats are combined to breed a new cat. While the possibilities for new and rare genetic makeups of a CryptoKitty is endless, the most expensive cats are the 1 – 100 cats or the founder cats that were first released (you met one of them in the beginning of this article).

As the cat’s value can appreciate or depreciate based on the market, it’s the users who are determining which cat is rare and not. Arthur Camara, a software engineer at Axiom said in an interview that the “Kitties that breed the most will make those traits more popular. So if you breed a lot of kitties with green eyes, that’s going to be less scarce. People control that scarcity in a way.” Last week, it acquired an investment of $12 million, the exact amount it earned in sales till December 2017.

The game’s popularity in December 2017 congested the Ethereum network with skeptics saying that it was blocking out more serious innovations. But to many, the brand is succeeding in its effort to normalise concepts associated with cryptocurrency by using illustrations, puns, and general catty things.

However, considering the current prices of buying the digital cats, CryptoKitties is moving further away from its goal of spreading education, accessibility, and widespread adoption of cryptocurrencies and the blockchain technology.