Restaurants Are Watching You Very Closely With Upserve

Restaurants Are Watching You Very Closely With Upserve

The restaurant industry is often accused of being caught in a time warp. Orders scribbled on pieces of paper, carbon copies fired at the kitchen, bulky point-of-sale machines, and a calculator (even if pocket-sized) is a common sight. However, after sheltering luddites for so long, the restaurant industry is finally marching ahead and using restaurant-management platforms for data-driven insights about their patrons.

One such platform is a Rhode-Island startup, Upserve. With a new-age POS that whips up restaurant analytics while managing payment, multiple menus, to even table maps, it is (literally) turning tables on the archaic world of running a restaurant.

The manager and heir of a 65-year-old eatery, The Sandwich Hut, agrees. “[We were] getting by just fine…until running around the kitchen with pieces of paper became a bit too much.” Adopting the Upserve technology, he says, “turned out to be a major step and a major paradigm shift for us. It just allowed us to grow the business much more easily.”

But to think that Upserve is barely digitising restaurant functions is to scratch the surface. The startup is using the right data to fix almost everything. Restaurants can now learn which menu item helps retention, see which waitress drives sales (and others who may need coaching), and also use reservation data to predict guest demands. Upserve does all of this while also serving as the backbone of the restaurant by managing online orders, supplies, inventory, and more.

And its customers, initially fearful and reluctant because of time-consumption and high upgrade costs, are elated with the advancements in cloud-based technology, and eager to experiment. The Four Corners Tavern Group, for example, had an existing POS system, but Director Ryan Indovina wanted to migrate to a more analytical tool that would do more than just process credit cards. As a former technology consultant, he was aware of how data could be used to customise dining experiences. The group runs 11 bars across Chicago and has a popular sports segmentation. With several college affiliations, many people swarm to watch evening matches. Indovina knew where to begin, “If a Boston team is playing a Chicago team,” Indovina says, “I want to market to my Boston fans as well.” But how was the question.

He became an early Upserve adopter once he learned that the platform could help “input a team’s calendar and identify the people who come in for games.” But Upserve took it much higher. Upserve now crunches data, identifies top-spenders, stores dining histories, and builds exhaustive profiles of customers that provides a context around each person’s visit to the bar. Credit card numbers are recorded and these customer profiles are supposedly also given a face through internet stalking, helping in marketing and circulating the right message through email and other communication methods. 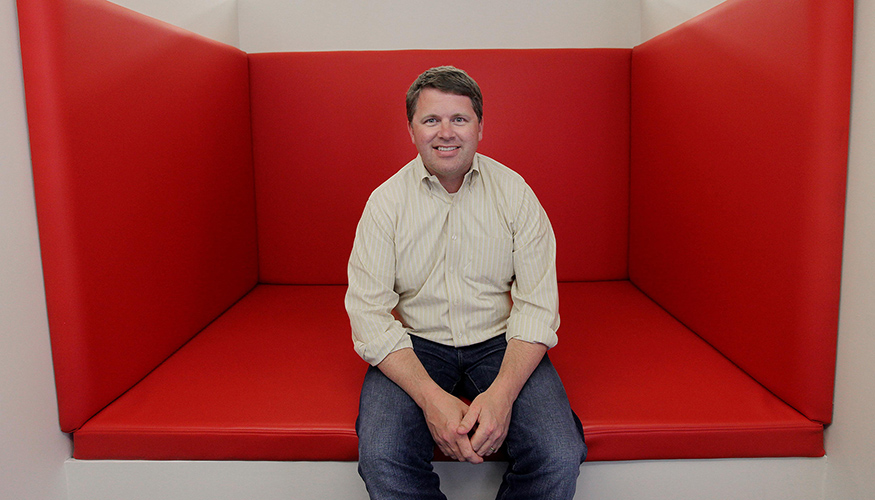 Upserve is not the first company of its founder and CEO, Angus Davis, but an organisation launched after years of experience in the tech business. In 1999, Davis started a telephone-based application called TellMe. Eight years later, TellMe was acquired by Microsoft in a plush deal that made Davis a very wealthy man. But Davis’ next company would not be born overnight but by utilising the startup world’s most essential lesson: pivot and find the best product-market fix.

In 2009-10, Davis moved back to his hometown Providence in Rhode Island and started a company called Swipely that would later be rebranded Upserve in 2016, but the Swipely of 2010 and Upserve of 2018 have few other similarities.

Swipely, was, at first, a social shopping service for people to post about their purchases. In May 2010, it raised $7.5 million in Series A funding from Index Ventures. It became an all-in-one payments, analytics, and marketing solution for local merchants two years later in 2012 and continued to add more features such as customer-resource management and social media integration. In 2013, it raised a Series B funding of $12 million and a $20 million Series C funding in 2014.

Already a couple of years in business, it became evident to Davis that restaurants were their major clients and that the company needed a laser focus on the restaurant industry. Finally in 2016, Swipely became Upserve, a name more apt for the industry it was focussed upon. In the same year, Upserve also acquired Breadcrumb POS from Groupon which already had many restaurant-management features. With this acquisition, Upserve started to streamline and build upon its existing suite of offerings. Davis maintains that the startup’s philosophy is empowering restaurateurs by helping them provide better service, run smoother shifts, and make more money. Although every one out of every 10 Americans works at a restaurant, and an average household spends an average of $3,008 per year on dining out, Davis is conscious of the fact that most restaurants are small businesses. Upserve’s core package start from $99 per month, per location.

But that hasn’t stopped Upserve from being the most-funded startup in Rhode Island with a total funding of $191.5 million. However, more than its own valuation, what’s noteworthy is how much business the platform is managing for restaurants; as of May 2017, Upsurge handled $11 billion in annual transaction volume. Upserve is thus the largest provider of cloud-based POS services for restaurants.

Upserve is thus the largest provider of cloud-based POS services for restaurants.

A large number of these transactions are online as, according to the NPD group, one-fourth of all U.S. consumers claim to have ordered a meal via delivery and delivery now represents 1.7 billion foodservice visits annually. Naturally, Upserve’s another major move has been its partnership with Grubhub and the launch of its integrated online ordering in 2017. Now with more than 32 million active diners and over 23 million meals per month, Upserve has grown more than 100 percent in the last year.

Upserve’s access to information is also helping it belt out sophisticated insights for its customers and the restaurant-industry. For example, it has found that a massive 80 percent of a restaurant’s food sales come from only 16 percent of menu items and has suggested that restaurants review the value of their offerings and consider minimal menus.

But Upserve’s upwards trajectory also begs a question whether old-school hospitality and knowing your patrons by name is dead. The startup’s practices may not be digestible to all, but as restaurants struggle to stand out, few options are available for those who mind this mining of data. They can opt out of receiving information but may not be able to deny the creation of a profile. They can, however, stop making reservations, frequenting the same restaurant, or paying by credit cards.

They can also choose to be surprised (or shocked) when after a few visits, their server refers to them by name and serves their favourite dish without asking.